Today I have a very subtle Sunday mani. It ended up being a bit more subtle than I intended, but hey sometimes you need a look that can fly under the radar, but you still want something a little *extra* going on; this mani is for those kinds of occasions. 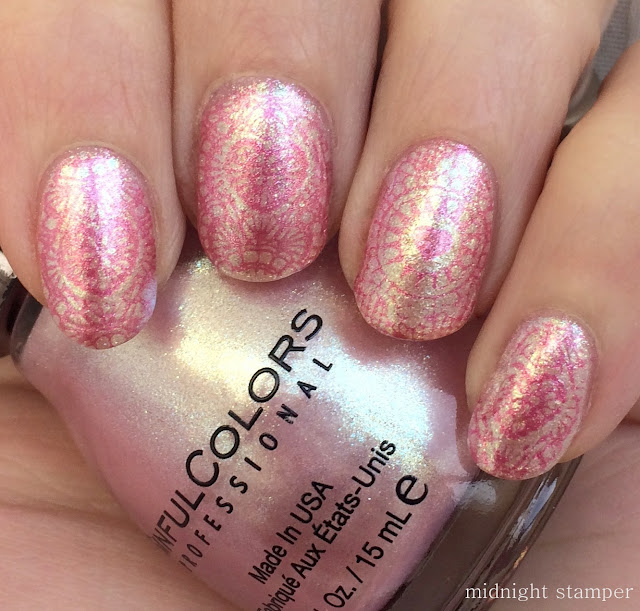 My main intention with this mani was to try out this new Sinful Colors polish. It's part of the Kandee Johnson line that's been slowly coming out over the last couple of months. Now, this is a super light pink shimmery polish that preforms exactly how you would expect it to. I put on at least four coats of this, and possibly five coats, to achieve full opacity. But at least it's pretty! Ha ha. 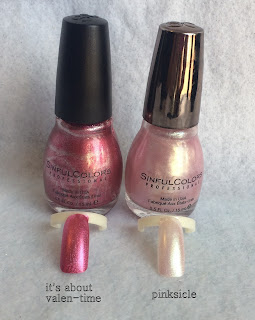 I paired it with a shimmer polish from this year's Valentine's Day release, because I have found that these particular shimmer polishes in this collection stamp super well, which is really useful. (To see one of the purples in stamping action, check out this post.) So I wanted to see how they would preform with a really intricate stamp, and it seems like it did a pretty good job! 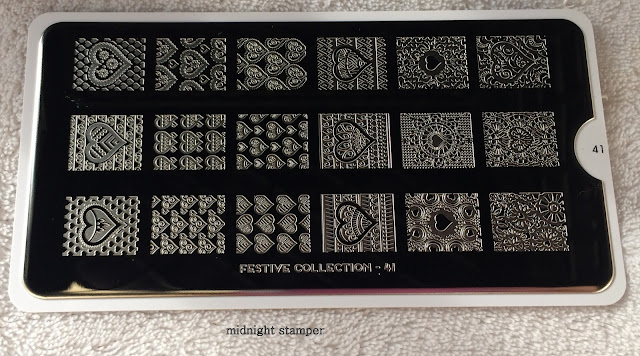 My images come this MoYou London plate, from the Festive collection. I've used this plate once before in a more cutesy mani, but I really wanted to try out the more intricate images and go for a more sophisticated look with this plate. At first I thought it would be fun to fill in some of the images with the large heart in the center surrounded by patterns, but let me warn you: those images in particular are super unforgiving; especially if your stamping polish is on the lighter side like the one I used here. I think the best ones for that technique would be the ones on the left-hand side; their borders have some substance. But the ones in the middle... hard pass, or use a nice opaque black stamping polish.

Anyway, I hope you are all having an awesome Super Bowl Sunday! I will be spending it *not watching* and painting my nails but we are at least acknowledging it by having loaded nachos for dinner tonight.  What are you all up to this evening? Rooting on your team, having awesome snacks, popping in for commercials only, or ignoring it entirely? Let me know in the comments!