Today's post is for the Challenge Your Nail Art group on Facebook, where there are prompts for every odd day of the month of December! December 3rd's challenge is "snowflakes", so I decided to break out a little bit of Olaf since he feels so at home in the snow. 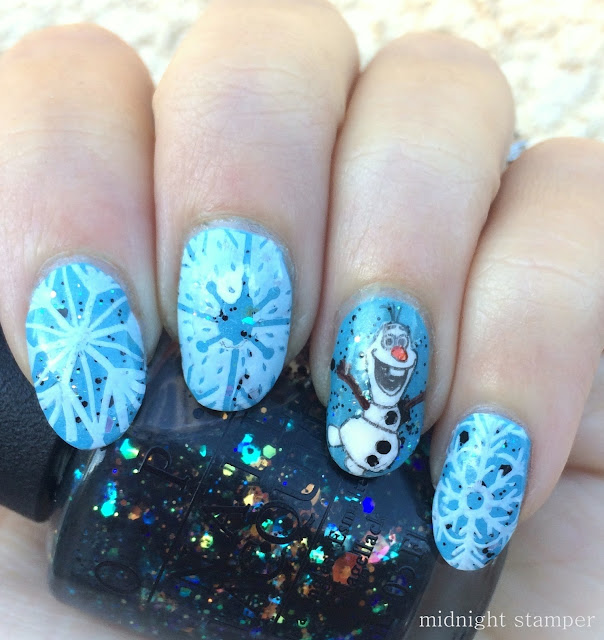 When I was planning this manicure, I was having a difficult time deciding which polish to use as a base color, mostly because I wanted to use a glitter with it and I wasn't sure how the stamping was going to look over the glitter. So I decided to make a kind of swatch worksheet to compare how some different colors were going to look to help me decide. 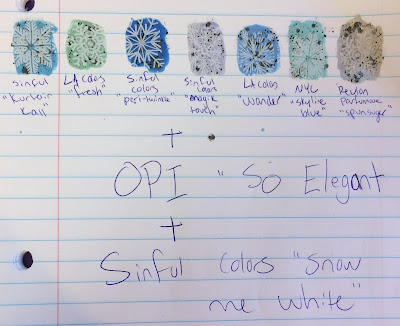 Basically I just swatched a bunch of colors I thought could work, then put the glitter- OPI "So Elegant"- over top, and finally stamped the snowflake images so I could get a sneak peek of what the final result would look like for each color. I ended up choosing Sinful Colors "Kurtain Kall", but  NYC's "Skyline Blue" was a close runner-up.

I used a peel-off basecoat because I was working with glitter, and I can't stand trying to remove glitter with nail polish remover; it's the worst. However, I will note that sometimes this base coat does peel off before I am ready, so if I'm using it it means I plan on doing my nails again tomorrow night.

My Olaf plate is an ebay one-dollar-wonder: 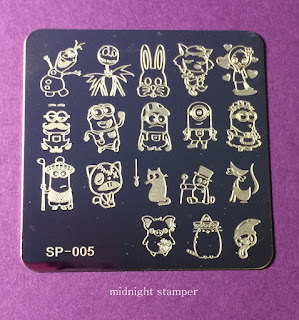 I don't know who a lot of the characters on this plate are, but it is awesome because it has Jack Skellington. 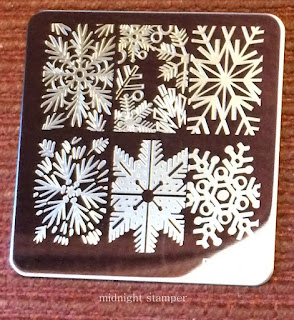 I realized when I was uploading this that the glare in the corner of the plate that I didn't think was a big deal when photographing it is actually obscuring the plate number *facepalm*. Maybe I should re-take the picture, but I'm just not that dedicated so I'll just tell you the plate number: BM-S213.