For today's 31-day challenge prompt, "rainbow nails", I was inspired by Nyan Cat. Even though Nyan Cat has been around for a while now, I have soft spot for him. It makes me smile that something so simple and silly has made a lot of people smile- and also annoyed the heck out of them, too. My kids are totally obsessed with Nyan Cat and always ask to watch it on youtube. It cracks me up that they still find it so funny even after seeing it a million times.

here's a picture for reference: 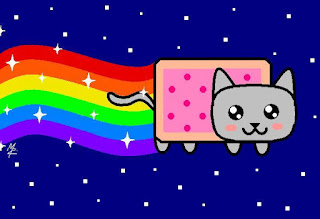 (picture from Melisa Rodriguez at deviantart)

So, I seriously considered doing a total freehand of Nyan Cat, but it would have had to be so tiny and I don't think I'm ready for that. So, instead, I decided to freehand the rainbow and Nyan Cat's poptart backdrop, but use reverse stamping for the cat face itself. Here's what I ended up with: 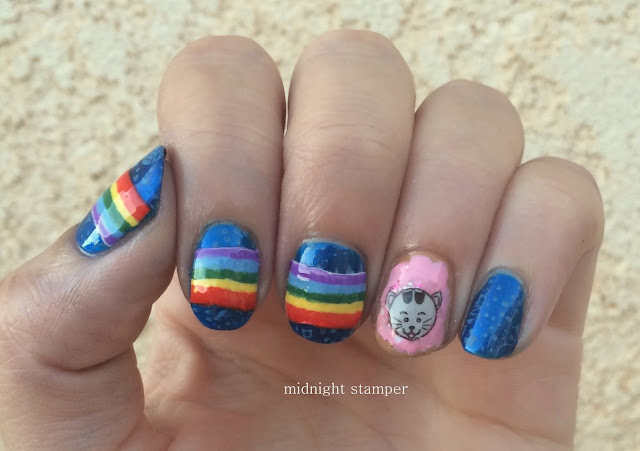 The poptart background didn't turn out quite like I wanted to, mostly due to me being impatient and forgetting that I had put glitter over the pink polish to act as sprinkles and stamping on my decal before it was dry. It smudged a bit, so to fix it I had to cover up more of the tan background part than  I wanted to.

For my rainbows, I decided to paint them on my silicone mat and then transfer them to my nails, because it is easier that way. 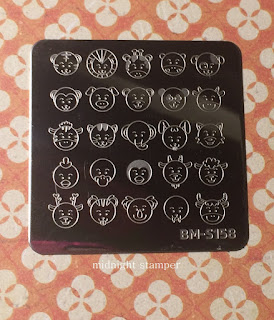 I'm excited to see what everyone else is doing for rainbow nails! Seeing what others come up with for the prompts has been one of my favorite parts of this challenge.